The Black Ferns have won the 2021 Rugby World Cup

In what is sure to go down as one of the best test matches of the decade, the New Zealand Black Ferns just beat out the England Red Roses to win the World Cup final 34-31.

Back-to-back tries from each country's signature style - a thunderous maul and skills to run out of their own try line - gave a sold out Eden Park and fans around the world an unforgettable display of the excitement, power, and passion of women's rugby. But in the end, New Zealand came out on top, with a shocking, edge-of-your-seat finish we won't spoil for those who haven't watched.

The champions thanked their supporters with a haka after winning the Rugby World Cup in front of the biggest audience to ever attend a women’s rugby match ever.
If you feel nothing watching this, we can’t help you. 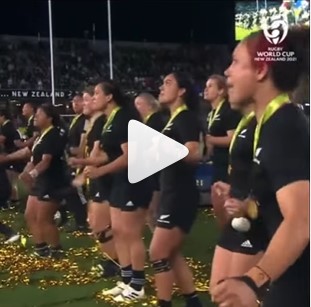